When I worked full-time in unique projects, writing the code and tests before running everything manually and then deploying to staging or production, also manually, was good enough. Now, however, with the potential to work in several and vastly different projects and environments, this "process" has become increasingly tedious; as such, as I've become more interested in operations since I started working with Docker, I tasked myself with automating this.

After a while of trying different tools, and the impossibility to work with others due to the limited income of a recent freelancer, I've settled in a process that I believe will suit me just fine, thanks to GitLab.com's all-around awesomeness. It beats the other offerings I considered by a margin:

Finally, GitLab has the advantage that its CI service is fully integrated and out-of-the-box with the git repositories, along with other useful or potentially useful features. One of these is that it works extremely well with docker, which I already use for local development.

My development process is now, roughly:

Right now, I'm pushing to Google App Engine, whose free tier, despite their lacking repositories2, is still the best option for me.

But enough of introduction, let's get on with the guide:

(If you're already familiar with creating a project in Google App Engine or use a different vendor, skip ahead to GitLab setup).

In the cloud console, create a project:

Fill in the name you want (I called mine "gitlab-test"). 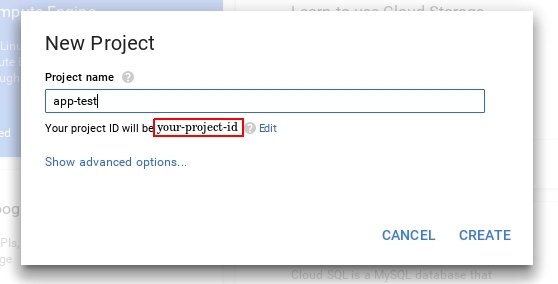 For all of the following steps, remember the project ID that was returned upon creation. 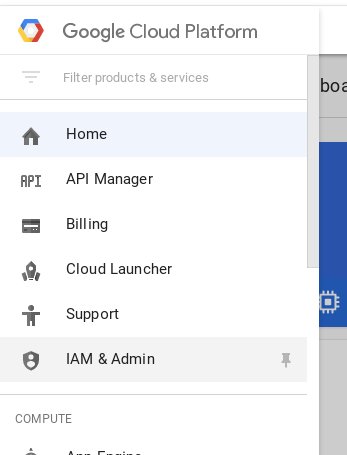 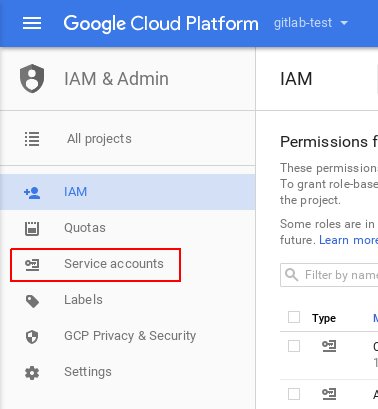 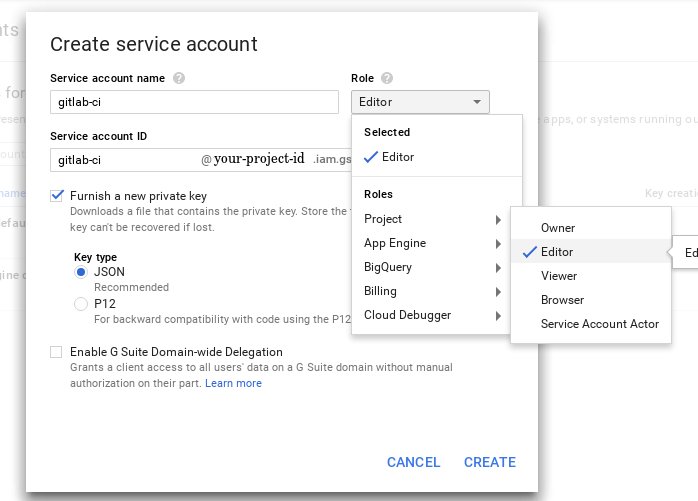 After clicking "CREATE", this will download a json file that contains the key that GitLab CI needs to connect to GAE.

Now we need to enable the two APIs required to deploy to app engine remotely. There's a straightforward way that is merely clicking a link but, since I wouldn't trust it myself if I didn't see it firsthand, I won't expect you to trust it either. So the slightly longer way it is:

In the google cloud console sidebar, click on API manager: 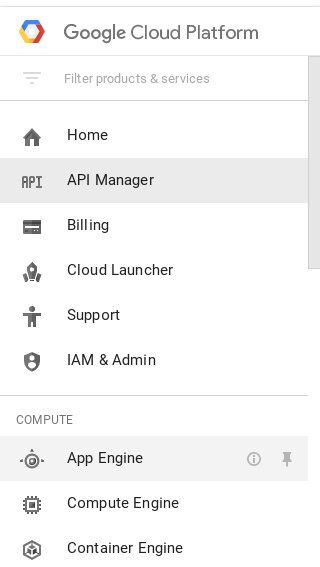 Once in the API manager, click in "ENABLE API".

In the library that opens there's a search box, type "app engine admin api" there and click in the first result.

(If you're already familiar with creating a GitLab project and setting up project variables, go straight to Code).

First of all, create a project by clicking on the "New Project" button:

Fill up the "new project" form using the settings and name you want: 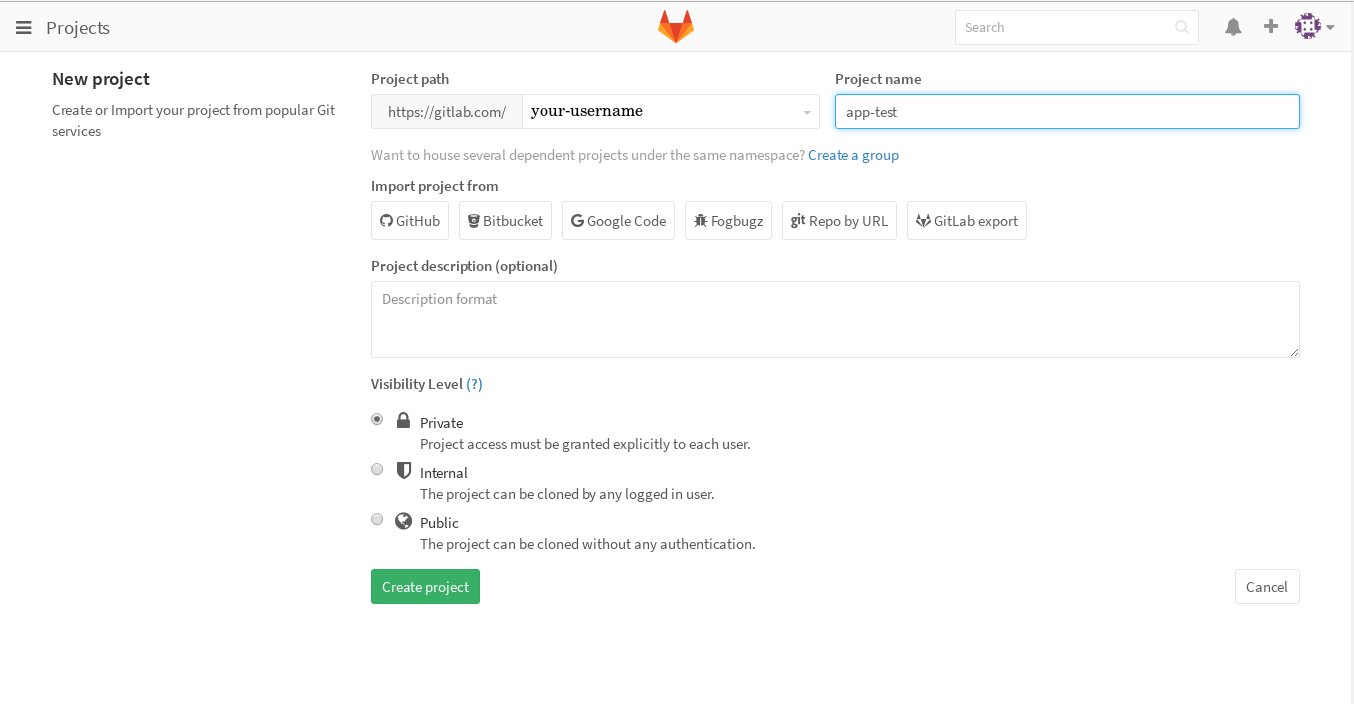 After sending the form, click on the project settings menu and select "Variables":

Set the GAE_PROJECT variable with the id of your Google Cloud Project:

Afterwards, set a new variable named GAE_KEY, whose value must be the contents of the json file we downloaded earlier from GAE. Delete the json file as it could be dangerous to have it lying around.

These variables might not be needed if the process to deploy to your vendor doesn't require authentication or there are other ways of authenticating.

The app we're deploying will be a simple "Hello World" in Flask with the following structure:

app.py is within a module and not in the root folder (which would be simpler) for ease of deployment to Google App Engine. This is its code:

test.py, as its name indicates, it's just a very simple unit test for app.py, as an example:

The app only has one dependency, flask, and that single word3 is the content of requirements.txt.

Now the stuff this guide is meant to be about. First the Dockerfile:

Simple enough: from the python image install the requirements and run the test.

docker-compose.yml is very simple too:

Build and run what's in the app folder

Now what allows GitLab to perform its magic, the .gitlab-ci.yml file:

There are a couple things happening here, but nothing overly complicated:

As you can see, to deploy we are using the variables (GAE_KEY and GAE_PROJECT) we set in the previous section.

Finally, app.yaml, which is specific to GAE:

This uses the module structure so it can use the external libraries (flask) in the project.

There's not much to this, just run docker-compose up and wait for the OK or possible errors. If there's nothing wrong, then we're ready to deploy. The Dockerfile and the docker-compose.yml file can be tweaked to actually run the server or perform any other task one might need.

In the root folder of our app, initialize git and add the repository URL of the gitlab project as remote. Then you only have to push the code and, after a few minutes, check the url [your-project-id].appspot.com and the "Hello World!" should be staring right back at you.

So that's it! We've deployed our app to GAE using GitLab. From then on, you can just dedicate yourself to writing the code and its tests. To deploy (to production or staging or any environment you choose), you just need to push and this process will take care testing and delivering the code if there aren't any errors.

Things we could do now is setting up automatic local testing on each commit, multiple stages and notifications for failed and successful builds, etc.

If you have any questions, let me know in the comments.